Solar plants are a complex set of electrical systems, which not only require regular maintenance but also constant upgrade of the software and the hardware to operate efficiently. The large number of variables, both controllable and non-controllable, make monitoring a solar plant a challenging task.

SolarPulseTM Background
To tackle these challenges, an effective and robust monitoring solution called SolarPulseTM was designed by MachinePulseTM in partnership with a large organization. There was a need for a dynamic monitoring solution that can identify, monitor and rectify performance issues for a client’s upcoming solar plant. SolarPulseTM was thus developed as a comprehensive solution to control the solar plant by providing detailed information on every component and subsequently identifying any malfunction, failure, or defect.

So how does SolarPulseTM improve Assets performance?
To demonstrate the capabilities of SolarPulseTM, we considered plants with 6.12 MW solar power in Phalodi, Jodhpur and Rajasthan. 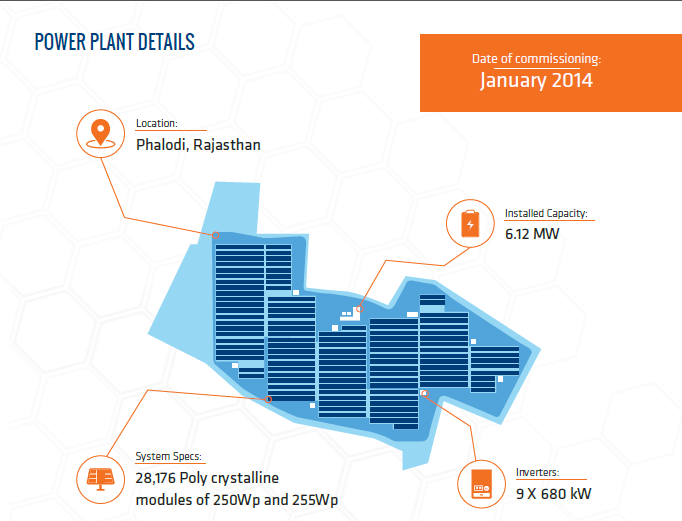 –Reduced field expenses
The real time monitoring solution of SolarPulseTM coupled with accurate predictions of plant efficiency and maintenance issues has enabled the O&M team at the solar plant to be proactive in their work. This has reduced the labour cost by lowering the requirements of field visits, inspections and on-site troubleshooting. The full inspections of the solar plants have reduced from weekly to monthly without a robust monitoring solution.

SolarPulseTM has helped our customers to:

–Reduced reporting time
SolarPulseTM has helped the O&M company to reduce the routine reporting time by 60%, which approximately amounts to 500 man hours per year. It has done so by providing quick access to complex sets of current and historical performance data.

–Increased uptime
SolarPulseTM’s early identification, rectification and accurate forecasting has helped to increase the plant up-time from 99.00% to 99.98%

–Increased Production and Revenue
Solar preventive maintenance scheduling by SolarPulseTM has helped to keep the modules in excellent condition which has improved the efficiency of the plant.

The above-mentioned advantages are just a drop in the sea of benefits and savings achieved by using SolarPulseTM. The cumulative benefit just from reduced field expenses, increase in plant uptime and PR was approximately Rs. 19 Lakhs for one year which in itself covers the cost of SolarPulseTM and makes its payback period less than even a year.

An Example of Problem Solving with SolarPulseTM

–Problem Identification
In April 2015, SolarPulseTM detected a loss of output in one of the strings which had a capacity of approximately 6.12 kW. SolarPulseTM compared the performance of this underperforming string with other strings within the inverter and also with strings across the plant and found a PV module problem only in the underperforming string. The plant was immediately informed and during this inspection it was found that the string was completely damaged because of the reason suspected by SolarPulseTM. The problem was solved within 6 hours.

–Why is String Level Monitoring an advantage?

–Savings
At the solar plant, SolarPulseTM notifies around four such string faults or failures in a year. Assuming that without SolarPulseTM, the faulty strings remain unnoticed for 6 months (until the next inspection), the loss of production would amount to 35,251 kWh per year. This represents 1.35% of total annual production and translates into revenue loss of Rs. 2.11 lakhs. The amount is significant considering the thin margins on which solar power plants run.

SolarPulseTM has the ability to detect any source of faults or failures in real time, verify their potential consequences and communicate them immediately to the O&M team at the plant to rectify them. Thus, SolarPulseTM plays an important role in ensuring that the solar plant performs efficiently and generates maximum returns for the investors.